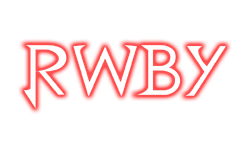 RWBY (ルビー,Rubī) is a web-anime-styled cartoon series created by Rooster Teeth, with the-late Monty Oum was the original creator of the series, the original English Voice Actor of Lie Ren who is succeeded by one of his brothers, Neath Oum in post-Season 2, around the time after Monty passed away caused by illness in 2015.

As part of the tribute to the late-Monty Oum, he was a fan of BlazBlue games, leading the inclusion of almost every RWBY cast in BlazBlue crossover, Cross Tag Battle. The characters are highly based on pre-Volume 3 incarnation, with a bit from Rooster Teeth's own video game RWBY: Grimm Eclipse and post-Volume 2. However, due to being completely new to the cast’s 2D fighting game debut, the differences are: